The three of us are writing by candle light. (The typical Indian light bulb at 40w max is insufficient for anything other than clambering into one’s bedding.)

The Japanese has been to the gompa at Alchi (video) – a gruelling 8 hour bus journey – and is obviously invigorated by his day.

So too is Pete, the Dutchman. As well as purchasing two thankas, Tibetan wall hangings, he’s hired a porter/guide and bought supplies for a solo trek from Hemis … 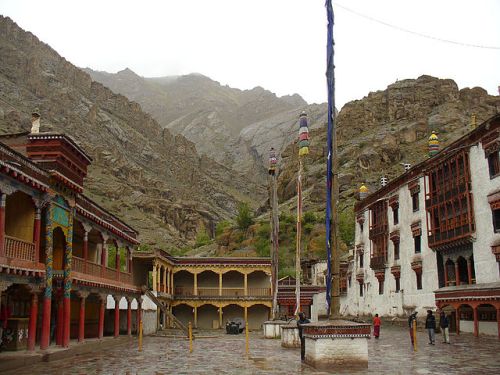 Me, I’ve climbed to the old gompa on the hill above in just 15 minutes, got the tops of my legs sunburnt while painting the picture of the palace, looked at the collection of tankas and eaten well at the Tibetan street café which has no windows but spaces where they could be. I ate well: vegetable chochow followed by rice pudding at the new Potala restaurant. And what a pud that was! Sprinkled with desiccated coconut and dotted with bottled cherries and roasted cashew nuts – really delicious. (But I still got the trots!)

At the Potala I got talking to Duncan and Barbara. An interest in games, including Othello (which prior to leaving the UK I was ranked top ten nationally), lead to a long discussion about travel being intensely personal. It turns out that their journey is in the opposite direction to mine and we expect to be in Fiji at the same time, April next year. I hope to get to know them better over the next two weeks before our paths press onwards.

10:10pm – time to close
Thoughts to examine further
– Loneliness of a long-distance solo traveller
– Travels on my stomach
– Impacts of tourist/travellers on a fragile community, previously self-contained and largely self-sufficient, and the infra-structure that follows: i.e. who is exploiting whom?

In this thanka, Siddhartha Gautama is witnessing Earth as the testimony of his enlightenment.

A Brit Abroad
View all posts by Jakartass →
This entry was posted in India and tagged 1985, Ladakh, Leh. Bookmark the permalink.