There are many people who, like me, are travelling the world for a year or so. The secret object is to discover a place to stop, a place which is both relaxing and interesting. The difficult part is the actual travel.

I’ve already mentioned the journey of some 28 hours by train and bus from Delhi to Srinagar. The journey I am about to describe took 16 hours longer, but must be one of the most memorable bus rides in the world.

The region of Ladakh is very remote. Surrounded by the Great Himalaya Range and Zanskar Mountains, at 10,000 feet, it is the highest inhabited ‘country’ in the world. It lies to the north of much of the the lower Himalayas, which get all the Indian monsoon rains, so it is very barren. The average annual rainfall in Leh, which is the town I am staying in, is only 2.5 inches per year. 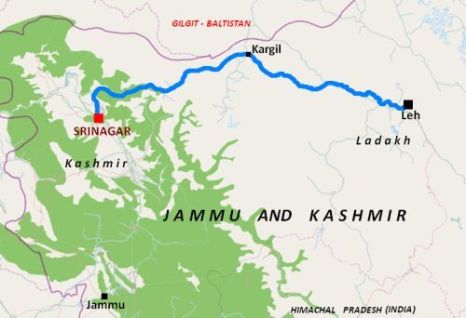 The first day the scenery was lush with a backcloth of snow covered peaks above coniferous forests. The valleys of Kashmir are fertile as glaciers have deposited good soil and a plentiful supply of water from the rapidly running rivers.

A careful, intricate, system of irrigation canals water the terraced fields, many of which are planted with rice. These small field are ploughed by two oxen pulling a wooden plough which is steered and pushed into the earth by barefoot turbanned men, sometimes watched by their sons. His wife and daughters help to plant and harvest the crops – backbreaking work.

All this we can see from the bus.

As we go higher, up a series of hair-raising hairpin bends, with a sheer drop of thousands of feet on one side, the road, always clinging to the sides of the mountains, cuts through unmelted snow, passes over bridges built alongside others which have been swept away by avalanches, rock falls or the fast flowing rivers beneath.

I had a window seat. (Watch Nate’s video of his much more recent journey.)

We stayed overnight in Kargill. The ‘hotel’ was very basic – and that’s wording it kindly. Bare wooden walls, uncomfortable beds, basically springs overlaid with a blanket with a short one as a cover in a room shared with truckers and others transitting through. And, strewth, was it cold!

The army is very active here as Kashmir borders Pakistan. With half of the state of Kashmir and Jammu being Muslim, perhaps that half should have become part of Pakistan after the partition of the British Raj in 1947.

The Kargill to Leh road is only suitable for single lines of traffic, so there are Up and Down convoys. These set off at certain times and are headed by military lorries, with buses, private trucks carrying provisions for the towns and villages en route, and other vehicles joining the queue. If the system gets cocked up, perhaps by a vehicle breakdown – which is usual it seems, then you can wait for five hours, as we did, before setting off on that particular section of the road. (Kargill street scene with military convoy c.2011)

Zoji La mountain pass rises to about 12 thousand feet and is exhilarating and terrifying in equal doses. 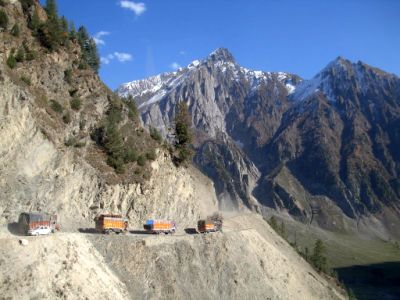 (Video of a motorbike journey along the unpaved road.)

Once over it the scenery changes. There is still upwards and beyond a glimpse of snow peaks, but the mountains in reach are bare. Eroded by wind and the extreme cold of winters, they sometimes assume intriguing sculpture like forms. The over-riding impression is of a moonscape: boulders and dust, all khaki coloured, desolate, with hardly a sprig of green to be seen. Impervious, it seems, to Man’s desire to confront Nature, at first sighting it’s quite amazing.

Occasionally one can see a nomadic herdsman, sometimes with family, shepherding a flock of long-haired goats to a summer pasture. Then, around another hairpin bend a valley opens out and the river bed is lined with lush fields and trees.

(A set of photos by Tumkur Ameen)

A Brit Abroad
View all posts by Jakartass →
This entry was posted in India and tagged 1985, buses, Kashmir, Ladakh, Letter to Son No.1. Bookmark the permalink.